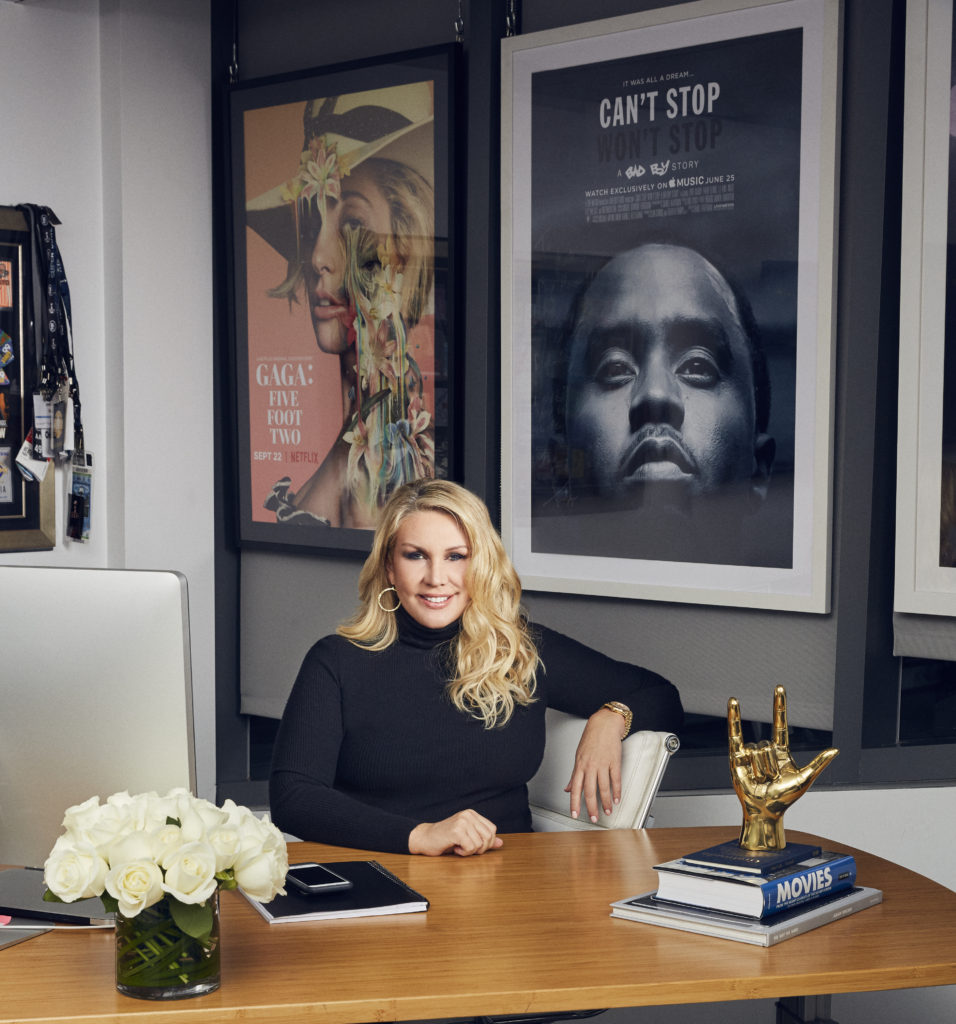 How does Heather Parry, president of Live Nation Productions, operate? A telling example comes in answer to a question about how her company became involved with “A Star Is Born,” the Bradley Cooper and Lady Gaga vehicle that is already one of the biggest films of the year.

“I know Bradley, and as soon as I heard he was going to direct it I called his agent, Dave Bugliari, who was on a ski lift at the time,” she recalls. “I said, ‘How does Live Nation get involved with this movie? We have venues and festivals and concert tours and all these assets and ways we can help you market,’ and he was like ‘I’m on a ski lift!,’” she laughs. “But to his credit, he called me right back and then talked to Bradley. Then I went to a dinner party for Martha Stewart at Bill Gerber’s house — he’s one of the producers of the film — and while everybody was talking to Martha about her recipes, I was in the corner pitching Bill on ‘A Star Is Born.’ We had meetings and showed them our media marketing deck and how passionate we were about it, and here we are.”

In short, she’s like a living LinkedIn profile with a relentless drive who rarely lets an opportunity pass, and she’s brought that energy to Live Nation Productions, the film and television division of the live-entertainment giant, which she launched quietly in December of 2015. Since then, the company has turned out the Sean “Diddy” Combs documentary “Can’t Stop Won’t Stop: A Bad Boy Story”; the Lady Gaga doc “Five Foot Two”; “Believer,” about Imagine Dragons frontman Dan Reynolds’ relationship with the Mormon church and its stance on LGBTQ issues; the Eagles of Death Metal doc “Nos Amis”; as well as the scripted film “The After Party,” starring Wiz Khalifa, French Montana and Teyana Taylor.

In the pipeline are films on pop singers Noah Cyrus (Miley’s sister) and Kim Petras (a trans artist), as well as its first television-series project “From Cradle to Stage,” based on the book written by Virginia Hanlon Grohl, mother of Foo Fighters founder Dave Grohl, which includes stories from other musician moms including Dr. Dre’s mother Verna Griffin, Janis Winehouse, Marianne Stipe, and others.

“Heather’s presence alone commands your full attention,” Combs says of Parry. “She is brilliant, driven, and hungry to do big things — so it’s no surprise that she keeps pushing the bounds of creativity with her work.”

All of the works have unconventional angles — or at least an angle beyond a straight biopic — and most of those angles came about after Parry’s team had begun work on the films.

“For ‘Can’t Stop,’ I was with [Combs] at the rehearsal space for the [2016] Bad Boy 20th anniversary tour when Faith Evans and Lil Kim came in,” Parry recalls. “I was like, ‘This is more than a tour — this is a reunion, and this film is about the story of Bad Boy.’ And for ‘Believer,’ Dan Reynolds originally pitched me a different idea about him growing up in Las Vegas, but [director] Don Argot called me saying, ‘We want to do a different story: We want to talk about Dan growing up Mormon, and how the church has to change their LGBTQ stance,’ and I said ‘That’s fantastic.’ Every doc does not start out the way the final product ends up.”

Parry’s power base is her formidable list of contacts, which began during her dozen years at MTV. She started out as a 22-year-old at MTV News, rising to become its West Coast Bureau Chief — producing “The Week in Rock,” among other projects — and then segued into film development and production, where she produced “Get Rich or Die Tryin’” (starring 50 Cent) and the remake of the ’70s football flick “The Longest Yard,” starring Adam Sandler. Also in that role, she acquired the first “Twilight” manuscript, but MTV parent Viacom did not see the potential of the franchise — which ended up raking in billions of dollars — and ultimately the rights were sold to Summit Entertainment. She left MTV in 2005 to become head of film at Sandler’s Happy Madison Productions, where over the next 10 years she produced “The House Bunny,” “Just Go with It” and “Pixels.” Days after she started at Live Nation, Colin Hanks (whom she’d met during her years at Happy Madison) pitched her on the Eagles of Death Metal film — during her birthday party — and her first project at the company was underway.

Over the past three years, she has learned to maximize Live Nation’s battery of assets to promote music-related films, which were exploited fully for “A Star Is Born.”

“Live Nation owns over 100 music festivals,” Parry says, “so, for example, in between Dierks Bentley’s and Blake Shelton’s sets at Country LakeShake in Chicago, we ran a trailer for the film in front of 55,000 people. At other festivals we put up big posters, and we had the trailer running in the suites and concession stands, not to mention the support of their sponsorship and marketing teams. We also looked at Ticketmaster data: Who bought Gaga tickets and what else did they buy? If they also bought a Bruno Mars ticket, he did ‘Uptown Funk’ with Mark Ronson, who also wrote the ‘Star Is Born’ lead song with Gaga, so that gave us another set of fans to reach out to.”

Blair Rich, Warner Pictures president of worldwide marketing, says, “Heather and Live Nation were instrumental in expanding our global audience, helping us get the film into the hands of music fans throughout the world. She activated Live Nation’s venues around the globe, and tapped into their powerful data and social media. Our dynamic marketing partnership went far beyond their investment in the film.”

And over the past three years, Live Nation itself has become a story generator for Parry’s division: Because its offices also house Maverick Management, several of Parry’s projects were hatched without her having to leave the company grounds. “That’s how ‘Can’t Stop’ started — [Live Nation CEO] Michael Rapino called and said, ‘Hey, are you in the office? We’re having a Bad Boy tour meeting,’ so I walked over and jumped in,” she recalls. “That’s also how ‘Believer’ happened — they were in a meeting next door. Same with Gaga, I sit next to her manager, Bobby Campbell. Noah Cyrus’ manager, Adam Leber, is to my left. One day, I was burning a candle in my office and she walked in and said, ‘Hey, it smells really good in here, I’m Noah!’ and we started talking and the project developed from there.

“It’s a place where things are constantly happening,” she concludes. “Talk about synergy: You light a candle and an artist appears!”