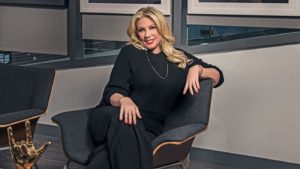 Heather Parry is a producer and director, best known for her award winning films A Star is Born, Gaga: Five Foot Two, and Believer.

She is the former President of Production, Film & Television for Live Nation Productions, Head of Film Production at Adam Sandler’s Happy Madison Productions, News Bureau Chief at MTV News, and Producer for MTV Films. Parry is a member of the Producers Guild of America, Academy of Television Arts & Sciences, and the Recording Academy.

As the President of Production at Live Nation, Heather Parry helped launch the Film & Television department in 2016. At the company, Parry was an Executive Producer on standout scripted films including the Oscar-winning phenomenon, A Star is Born. A Star is Born, released by Warner Bros, marked four-time Oscar nominee Bradley Cooper’s directorial debut. Cooper co-starred alongside multiple award-winning, Oscar-nominated Lady Gaga in her first leading role.

At Live Nation, Parry also led the production of four groundbreaking musically-driven documentaries: Eagles of Death Metal: Nos Amis (Our Friends), which debuted on HBO and was nominated for two Critics’ Choice Documentary Awards, including Best Documentary, Can’t Stop Won’t Stop: A Bad Boy Story, which premiered at the 2017 Tribeca Film Festival before becoming exclusively available on Apple where it hit No. 1 on the iTunes Documentary charts across the Globe and took home the Hollywood Documentary Award at the 2017 Hollywood Film Awards, Gaga: Five Foot Two, which premiered at the 2017 Toronto International Film Festival before becoming available on Netflix in over 190 countries and won Best Music Documentary at the 2018 MTV Movie and TV Awards and Best Music Film at the 2018 NME Awards, and Believer, which was released by HBO in June 2018 and was also an Official 2018 Sundance Film Festival selection, where it won runner-up for the Festival Favorite Award out of 123 films screened. Believer also won the GLAAD Media Award for Outstanding Documentary at the 30th GLAAD Media Awards and was nominated for an Emmy for Outstanding Arts & Culture Documentary at the 40th News and Documentary Emmy Awards.

Prior to her work at Live Nation, Heather Parry served as the Head of Film Production for over a decade at Adam Sandler’s Happy Madison Productions. After producing a successful remake of The Longest Yard in 2005 starring Adam Sandler, she was asked to join his company. There, she oversaw hit films such as The House Bunny, Just Go With It, I Hate You Dad, and Pixels. The House Bunny, Happy Maddison’s first female-centric comedy starring Anna Farris and Emma Stone, was nominated for the MTV Movie Awards for best comedic performance and grossed over $70 million worldwide.

Parry was also the West Coast News Bureau Chief at MTV News and a producer for MTV Films. At MTV, she supervised shows including TRL, The Week in Rock, and Till Death Do Us Part, a reality series featuring Carmen Electra and Dave Navarro. During her 12 years at the MTV, Parry worked with some of the world’s most recognized artists.