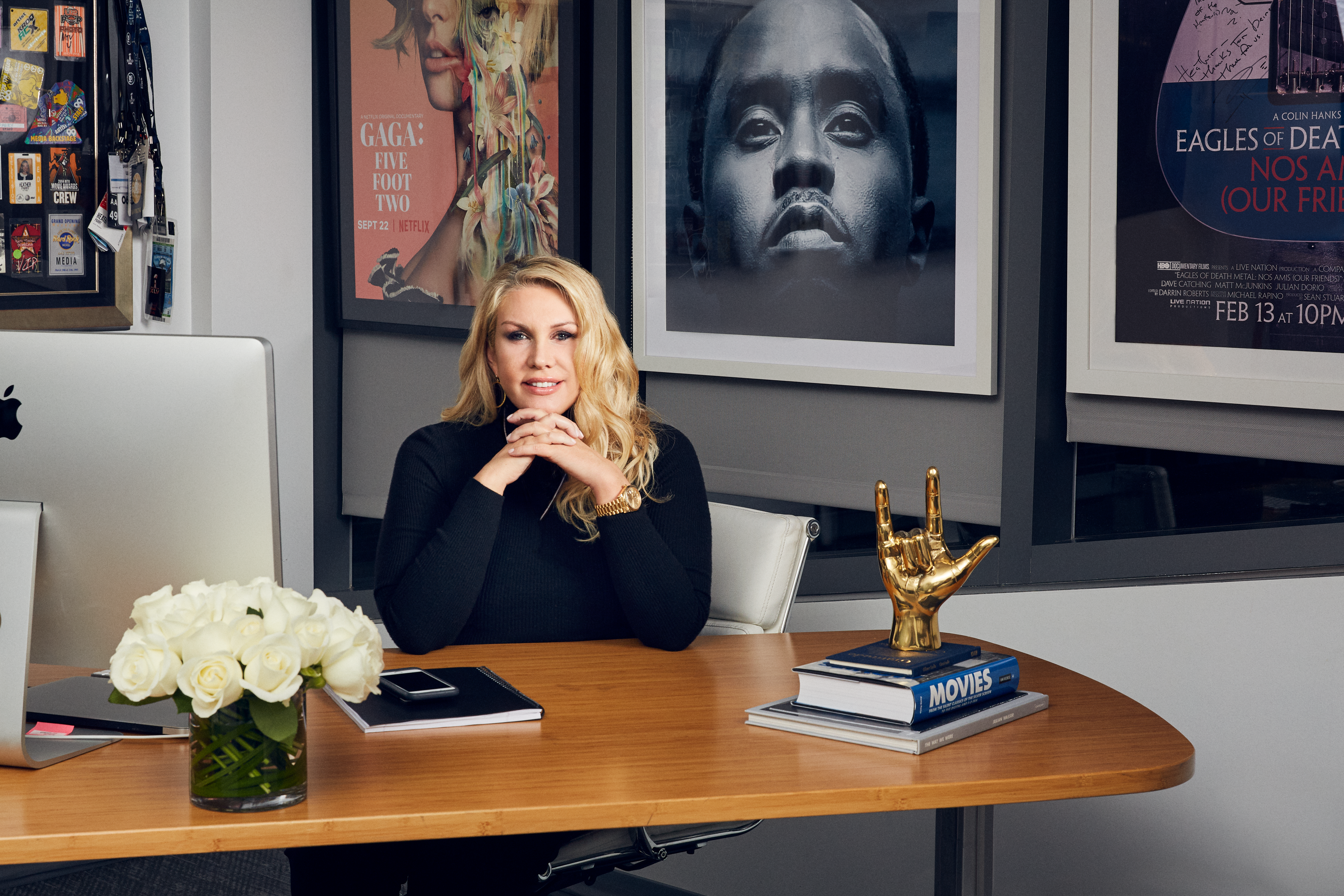 Live Nation’s film and television division, Live Nation Productions is coming off an astounding reception of their latest documentary Believer at the Sundance Film Festival. Believer follows Imagine Dragons lead singer Dan Reynolds as he grapples with his faith as a Mormon with the rising teen suicide rate in Utah, especially among the LGBTQ community.

Along with the openly gay lead singer of Neon Trees, Tyler Glenn who also grew up Mormon, the two struggle to create a concert that brings together the LGBTQ youth and Mormon faith since the church doubled down on its opposition to homosexual activity.

“Being the lead singer of Imagine Dragons gives (Reynolds) a voice to change things and to talk to the Mormon church and say ‘Hey guys you have to change your ways,’ said President of Production, Film, and Television at Live Nation Productions, Heather Parry. “For Believer, it was let’s go to Sundance because the ground is going to shake.”

Believer has been lauded as a standout at the festival, winning runner-up for the festival favorite award out of 123 films screened.

The success of Believer follows the critical acclaim of Live Nation documentary Gaga: Five Foot Two, which recently won NME’s Best Music Film award, and last year’s heart-wrenching, Eagles of Death Metal: Nos Amis, a depiction of the band’s return to Paris after their concert at Le Bataclan theater in 2015 was attacked by terrorists, killing 130 fans.

“I didn’t announce that I was leaving Happy Madison and going to Live Nation,” Parry told Amplify. “I wanted to be a race horse with its blinders on and instead of telling people what I’m going to do, I wanted to just show them.”

Live Nation Productions hit the ground running with a feature-length concert film, 2016’s Justin Timberlake and the Tennessee Kids, and has continued to evolve the types of films they are producing.

“I had a meeting with Michael Rapino and we talked about our love of certain films, tv shows, and documentaries. We talked about Straight Outta Compton and Foo Fighters: Sonic Highways,” Parry said. “Michael is always on the mission of artist-first and we both thought ‘Wouldn’t it be great if artists had an outlet for film, TV, and documentaries.’”

Live Nation Productions is now working on two feature films, Bradley Cooper-directed A Star is Born starring Lady Gaga and scripted comedy The After Party featuring Wiz Khalifa and French Montana. Parry also revealed to Amplify that they are in the process of editing a documentary that follows Noah Cyrus’s journey growing up in a famous family. We sat down with Parry to learn more about Live Nation Productions and where the division is headed.

Omar (Al-Joulani) from touring came to me and said Dan Reynolds from Imagine Dragons has this idea, would you have a meeting with him? He had pitched an idea about the different people you meet on Fremont Street in Vegas, because he had lived there and met the different characters in that area. As most artists are, you sit in a room with Dan and he was very passionate and excited about what they are talking about, so I said ‘Okay. Let’s try it.’

We hired Don Argott as the director and as they were shooting they changed the idea. They called me and they said, ‘This is what we think it is.’ And I said, ‘I love that.’ Dan wanted to tell his story of how he was fed up with how high the teen suicide rate was for LGBTQ teens in Utah and he wanted to make a difference. It was all of these things combined, the saving lives, music healing, being an outlet for people and Dan being able to relate to the story since he grew up Mormon.

Eagles of Death Metal: Nos Amis was also a really impactful film that you were a part of. How did that come to Live Nation Productions?

I’m so grateful that that was our first documentary. I knew the director, Colin Hanks really well and he was really good friends with the band. That story needed to be told to heal people, to heal the band and to heal fans. I’m glad that that was our first because we’re not making electronic press kits, telling you how great our work is. We’re going ‘Hey, there are some really great moments in this journey, but there is also fear and hard work and it’s intense.’

I made House Bunny (2008) at Happy Madison with Colin. I told him I left Happy Madison and said I’m starting this production company with Live Nation and I really want to do music-based content. I wanted to do really cool stories about artists and their journeys. Colin wanted to tell the story about how when life knocks you down and you have to get back up. The Eagles of Death Metal went back to Paris to heal and when Colin started making the film it turned into the journey about their incredible friendship. It wasn’t just the music that healed them, it was the friendship. He needed a small amount of money to go and do it and I said ‘We’ll pay for that.’ He left for Paris right after that.

So far Live Nation Productions has dealt with issues like religion, LGBTQ suicide, terrorism, PTSD, etc. Is it safe to say you aren’t afraid of controversial topics?

Yeah. No fear. When you’re starting something new, you ask yourself ‘What’s the goal here?’ When we were doing (Can’t Stop Won’t Stop: Bad Boy Story), Puffy kept playing his mantra from Nina Simone that kept repeating “No fear” and “You know what I think freedom is, it’s having no fear.” I would hear it because he would play it 100 times a day. I’m really proud when I look at the different moves we’ve made at Live Nation Productions. Believer will be our fourth one and I think people are starting to take notice.

Live Nation Productions started with a concert film with Justin Timberlake and has moved towards more involved storytelling. Is that a progression we should expect to see more of?

One hundred percent. We have a bunch of stuff that we are working on now. We have a comedy coming out on Netflix called The After Party. It is sort of like a hip-hop Superbad. It has cameos from French Montana and DJ Khalid. It is very different from A Star is Born, but again it is artist-based content.

Is the plan to always have a music component to your projects?

Live Nation Productions has already worked with various distributors. How do you choose where to take the material?

That’s the great part of Live Nation Productions on the documentary front. We funded those documentaries. When it came time, Puff and I went to different outlets, spoke to different people, and showed different people the movie. Because of what Apple was going to do and the way they were going to support it, we picked Apple. We also love Jimmy Iovine and Larry Jackson. They had a really great plan.

After we had made Gaga, we showed it to a couple of buyers and Netflix came with the strongest marketing plan. And that’s where you get to go, whether your partner is Puff or whomever. Colin ended up directly calling HBO and saying ‘I think you guys should watch this.’ It is being able to make something that the artist, the director, and Live Nation all feel really good about and then figuring out where the best place for it is. You get to focus on the film instead of what release date they are going to give us or something.

There has been a diversity in your projects as well. Has that been strategic?

Absolutely. Diversity exists in music so beautifully already. It is not something that I feel someone needs to overthink. It is beautifully and naturally happening. I love that I had Puff who is all about black excellence and there you went right to Lady Gaga who is an amazing strong female. It was a natural progress. Of course you want to work with those people. I think about this stuff because on one side of my office is Bobby Campbell, Lady Gaga’s manager and on the other side is Adam Leber, who is Miley Cyrus’ manager. Working at Live Nation is a mix of people and artists.

Working in the Live Nation office, do you feel you have a lot of access to music people and artists?

Adam Leber also manages Noah Cyrus who liked the way my office smelled one day because of a candle. She was 17 and wouldn’t stop talking and was smart and she just had a single come out. She played our lobby next door so I went to go see it and she was great. So I said ‘Let’s do something with Noah.’ As great as it is to have the legends like Puff and Gaga, how great is it to also show a 17 year-old girl who is just starting? We’re avoiding boxes. We’re editing it now, but the Noah stuff turned out great. It is everything from her tour to the house that Billy Ray first bought where there are beautiful horses and her cow. We follow her to the high school where her parents first met and the Cyrus family graveyard. Noah is also the kind of story we want to tell, because why not. It’s her journey.

What can we expect next from Live Nation Productions?

This year will be our jump into two features, The After Party at Netflix and A Star is Born at Warner Bros. Believer will be out some time in June around gay pride. All those things are very different moves from what our slate looked like last year. I want it to keep growing and evolving. We will always do documentaries because there will always be artist stories, but artists also want to do features. They have a book they like or a story they want to tell. What I would expect from us is that No Fear factor.